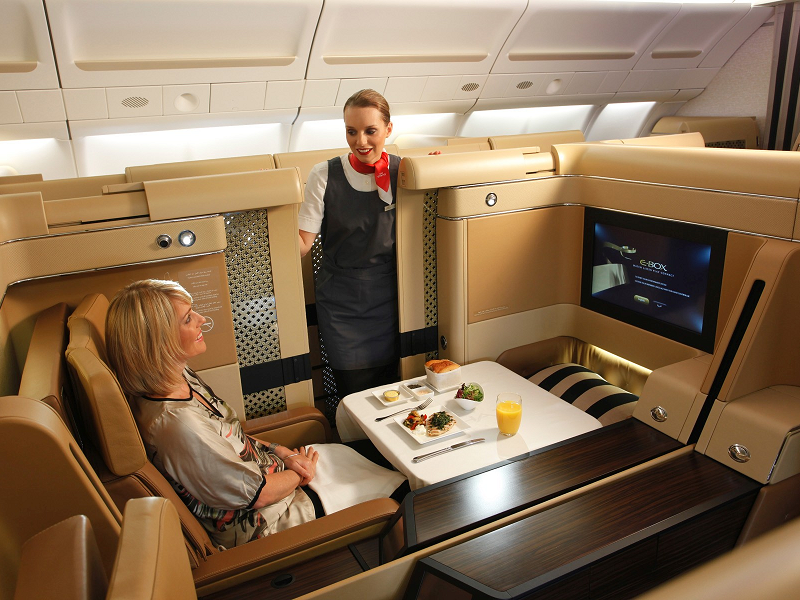 How many times have you boarded a plane and walked through the business class section to find that your seat in economy is not one of those wide, spacious, comfy-looking reclining spots at the front of the plane, but instead resembles a battery farm cage?

Your meal looks like it’s made of plastic, the blanket is wafer thin and the size of a flannel, and the entertainment system is broken – ring any bells?

Most of us have been there, but don’t despair – long-haul flights in economy class may be no one’s idea of fun, but there are things you can do to make the whole experience a tad more enjoyable.

We’ve rounded up some tricks, advice and hacks to help you survive that journey and walk off the plane more refreshed and raring to go then you might have thought possible.

It may sound obvious, but airlines vary greatly in their service levels – unless you are completely driven by paying the lowest possible price, being picky about who you fly with long-haul can make a big difference.

Skytrax run the most respected of the airline awards and their ‘airlines of the year’ are based on consumer feedback. According to their most recent awards:

The top five carriers in the world for economy travel are:

The best food in economy can be found in these airlines:

And finally, the best seats in economy are as follows:

Two aircraft launches in the last five years have begun to transform long-haul flying and take comfort to a whole new level. The Boeing 787 Dreamliner and the Airbus A350 are both new-generation planes, and the secret to the improved experience these aircraft offer is all in the way that they are pressurised and how the air is circulated.

So what difference does that make? Without getting too technical, the impact on you is that with lower cabin pressure you can take in more oxygen, meaning you feel less tired once you reach your destination.

Factor in the bigger windows, better lighting, more spacious cabins and a far quieter aircraft generally, and you’ve got a plane that make long-haul flights far more pleasurable. Thomson and Norwegian both fly 787s from the UK, as do British Airways and Virgin Atlantic for some flights too, and more aircraft are on the way every month.

I’m a big fan of the right-hand side of the aircraft with a window seat where I can see down and not straight over the wing, and ideally only one seat away from an aisle. This may sound picky to you, but it can be a deal-breaker for me when I fly. Others hanker for seats with extra leg room or those at the front of the cabin (called the bulkhead) where there is no one ‘in front’ of them.

So how do you go about securing the seat that suits you? This New York Times article points out that most airlines will let you pre-book your seat, although it often comes with a fee. However, the investment of a few pounds is well worth it to get the seat you prefer, and even though there’s a small chance the airline could move you, I’ve found it rarely happens these days.

Use a site such as SeatGuru and you can check out the aircraft used by your preferred airline on the route you are flying to avoid seats that are deemed poor because of their location on board – although bear in mind that airlines do sometimes vary how they lay out their seating.

If you are not prepared to pay for a seat, then make sure you’re one of the first to check in so you can grab the pick of what is left – nobody wants 43E in the middle of a wide-bodied long-haul jet, after all.

Eating and drinking on board

Increasingly airlines are charging for onboard catering, even on long-haul flights. So why not explore what the airlines offer in terms of upgraded meals?

For example, British Airways now offers a service where you can pre-order your onboard meal when flying long-haul – their options range from a ‘Best of British’ breakfast through to a gourmet dining meal from an extra £12 per person if booked by August 15.

Alternatively, treat yourself to a bottle of fizz to celebrate your long-haul flight – many airlines offer this at a reduced price or in small bottles.

If you’re still having a horrible time, then perhaps economy is just not for you. It’s not likely, but there is a chance of being upgraded should the airline be in a position to do so. You can help your odds by signing up to frequent flier schemes – the more you fly, the better the chance you will be picked, especially if you are flying alone.